Brokerages expect that Employers Holdings, Inc. (NYSE:EIG) will report $164.18 million in sales for the current fiscal quarter, according to Zacks. Two analysts have issued estimates for Employers’ earnings, with the highest sales estimate coming in at $174.50 million and the lowest estimate coming in at $153.86 million. Employers posted sales of $204.30 million during the same quarter last year, which suggests a negative year-over-year growth rate of 19.6%. The firm is expected to report its next quarterly earnings report on Wednesday, July 22nd.

According to Zacks, analysts expect that Employers will report full-year sales of $596.91 million for the current year, with estimates ranging from $565.92 million to $627.90 million. For the next financial year, analysts forecast that the company will report sales of $623.78 million, with estimates ranging from $589.65 million to $657.90 million. Zacks Investment Research’s sales averages are a mean average based on a survey of research analysts that follow Employers.

Employers (NYSE:EIG) last released its quarterly earnings data on Thursday, April 23rd. The financial services provider reported $0.35 earnings per share (EPS) for the quarter, missing the consensus estimate of $0.53 by ($0.18). The company had revenue of $188.10 million during the quarter, compared to analysts’ expectations of $184.79 million. Employers had a net margin of 8.99% and a return on equity of 7.47%. During the same period last year, the firm earned $0.94 earnings per share.

The company also recently announced a quarterly dividend, which was paid on Wednesday, May 20th. Investors of record on Wednesday, May 6th were given a dividend of $0.25 per share. The ex-dividend date of this dividend was Tuesday, May 5th. This represents a $1.00 dividend on an annualized basis and a yield of 3.34%. Employers’s payout ratio is 31.25%.

Employers Holdings, Inc, through its subsidiaries, operates in the commercial property and casualty insurance industry primarily in the United States. It offers workers' compensation insurance to small businesses in low to medium hazard industries. The company markets its products through independent local, regional, and national agents and brokers; alternative distribution channels comprising its partners; and through national, regional, and local trade groups and associations, as well as directly to customers. 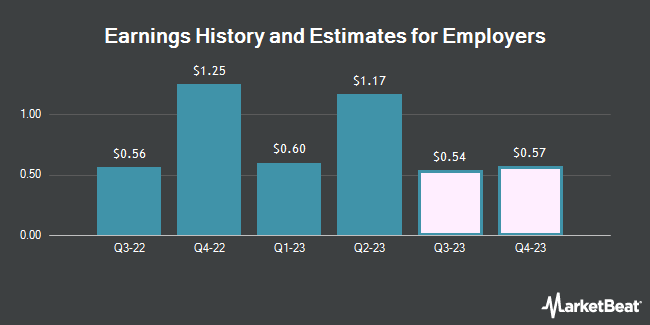 Complete the form below to receive the latest headlines and analysts' recommendations for Employers with our free daily email newsletter: